Posted on September 18, 2014 by Brad Silberberg

Monarch butterflies populations have been dramatically reduced by nearly 90% by some estimates in the last couple of years, largely due to the eradication of their host plant, milkweed. They have been added to the “threatened species” list by the United States governent.  Here is a story of this iconic creature and how I was touched by the grace and beauty of one of their dwindling numbers. 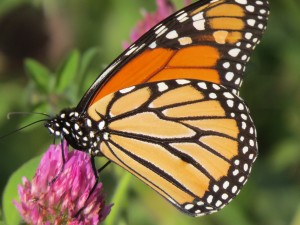 Summer has really flown by and I have continued to work on my own healing, gradually reshaping my life and my home in rural Eldersville, PA. I go up to The Mesa and make large or small efforts towards moving out of the building most every day, occasionally ship sacred geometry glassware as far off as Australia, and sandwich in a healing client, shopper, or seeker in need here and there.  I’ve spent a lot of time alone, not always by choice.

Needless to say, vacating The Mesa has not been the most pleasant of tasks for me as I sort through years-worth of stuff– treasures, junk, and “Why do I even have these?” alike, along with piles of fond memories to fold up and gently put away.  It has gotten easier over time as the days grow shorter again and more time passes since my dear Kate went home to Spirit 16 months ago.

Some things have gone into the dumpster or the recycling with a tearful blessing or hearty “good riddance!,” occasionally after a great emotional or mental tug-of-war that later seemed laughable.  Other items I’ve dropped off to charity organizations like Goodwill Industries (“How many baskets could one woman possibly have?! Oh, they resemble nests…”) or Habitat for Humanity’s Restore.

A load of art supplies went down to a remote coffee growing village in the mountains of Nicaragua with a church mission, and was much appreciated. The crayons, jiggle eyes, fruit scented markers, and other kids’ crafts were delivered to the Washington Community Arts and Cultural Center in Washington, PA.  I have no regrets about what I’ve given away; more trouble bringing myself to advertise what I want to sell.  I’ve started taking some things home to display or store.  There’s more to go that I’m still undecided about.

It’s been a new level of making hard choices, letting go, and carrying on with living life as it comes, even when it seems to come at a snail’s pace compared to what I might have envisioned things would look and feel like by now. Much of the time I’m not sure if I’m going with or against entropy, moving towards greater order or chaos within the system.  These days I am humbled by the vastness of what I don’t know and can’t possibly understand.

This scaling back process has also caused me think long and hard about possession-induced madness, and what was going on that caused this or that to be collected in the first place.  Much of it seems irrelevant to where I am now, yet the possible role it could play in where I will be in my near future is still a blessed mystery to me.  It all has to go somewhere other than where it is, and—(I don’t know if you’ve noticed this–) it’s harder to do anything right now just because it’s 2014.  Blame it on the state of the Flow of Creation as it pressures for nothing less than planetary change.  Talk about bad, er—I mean, Divine Timing!

My greatest joy of late has been taking nature photos and I have been truly blessed with amazing sights. In the last two weeks I’ve taken hundreds of pictures like the one above of the dozens of Monarch butterflies that had been hatching out nearby and feeding on the red clover that grew in the fields next to the Mesa driveway as they readied for their southward migration to Mexico.

It was when I started reading about the plight of the iconic Monarchs in the online news a while back that I first found myself wondering if I had seen any Monarchs this summer at all. Naturalists had found that their numbers had shockingly diminished, not because of loss of winter habitat in Mexico, but likely from extermination of their host plant in the USA, the lowly milkweed.  (Milkweed flower essence helps release escapism and develop healthy self-reliance, as it works out.)

Just days after that I noticed my first Monarch in my yard, excitedly chasing after it until it disappeared into the woods down the road. Right away I started seeing one or two wherever I went.  Suddenly, it seemed they were everywhere, but especially up on The Mesa in mid-afternoon.  Nearly impossible to pick out amongst the clover while feeding with closed wings, I’d spot them when they fluttered to the next flower and went bounding after them with my camera.

One day as I was turning onto Rt. 18 headed home, I saw something in the road that made me immediately pull over. I got out of the car, ran to the middle of the road, and saw that I had been correct– it was a wounded Monarch that had likely ricocheted off someone’s windshield.

As I scooped it up and got back into the car, I could see that the tip of its thorax was leaking fluid, sticking to its wing. It just sat in my hand as I stroked it gingerly to help straighten its misarranged wings, sending healing energy with one finger.  I was concerned for its survival in the state it was in, so I decided to take it home with me for better or for worse.  It sat on the car seat the whole trip, even while I stopped briefly at Kroger’s for much needed groceries.  (Yes, I left the windows cracked.)

When I got my “patient” home, I jokingly named it “Kevin”, smugly satisfied that it was the most wholly inappropriate name I could think of for a Monarch butterfly. I carefully and repeatedly separated its wing from the wound until it began to heal.  I began reading online about Monarch behavior and how to care for “Kevin”.

That was two weeks ago now, and “Kevina” is still with me.  (Some wise-ass I emailed his photo to found out how to tell by his markings that “Kevin”– was female.) In the morning I have my coffee and she has her Juicy Juice, uncurling her slender proboscis to suck it from a yellow sponge.  She warms herself as Monarchs do by trembling her wings, sometimes shaking so hard preparing for takeoff that she comically falls over, and flutters about a bit.

“Kevina” really cannot fly much, but she walks around with her beautiful wings displayed fully open, occasionally stumbling and tipping over as I imagine one would be apt to do carrying such a huge hang glider on spidery legs. She immediately rights herself and carries on instinctively towards the light of the window.  When she’s at rest she folds up her wings and I have to be careful to locate her before I step as she nearly disappears on the carpet.

It’s not lost on me that I am a bit like that wounded butterfly at this moment in my life. How fragile we both are; feeling the pull of the Light, the instinct to migrate, and still not quite able to fly.  Does she miss her kind?  I do.  (Should I take “Kevina” and go to Mexico? Olé!)  Her metamorphosis is complete, while mine clearly continues.

I’m still fluttering around if you’d like to come by and chat, get some coffee, or schedule a healing or mentoring session. Call and leave a message or email, and we’ll talk.  “Kevina” is available by appointment only.  I’m holding out that she’ll get strong enough to release while it’s still warm.  Otherwise, like me, her future is uncertain. 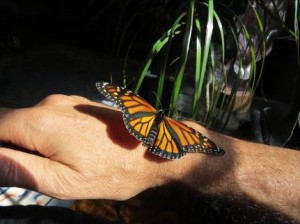 Footnote:  Not long after writing this post for the Mesa News the week before the fall equinox, little “Kevina” passed away after living with me in the living room for almost exactly 3 weeks.  I miss her.